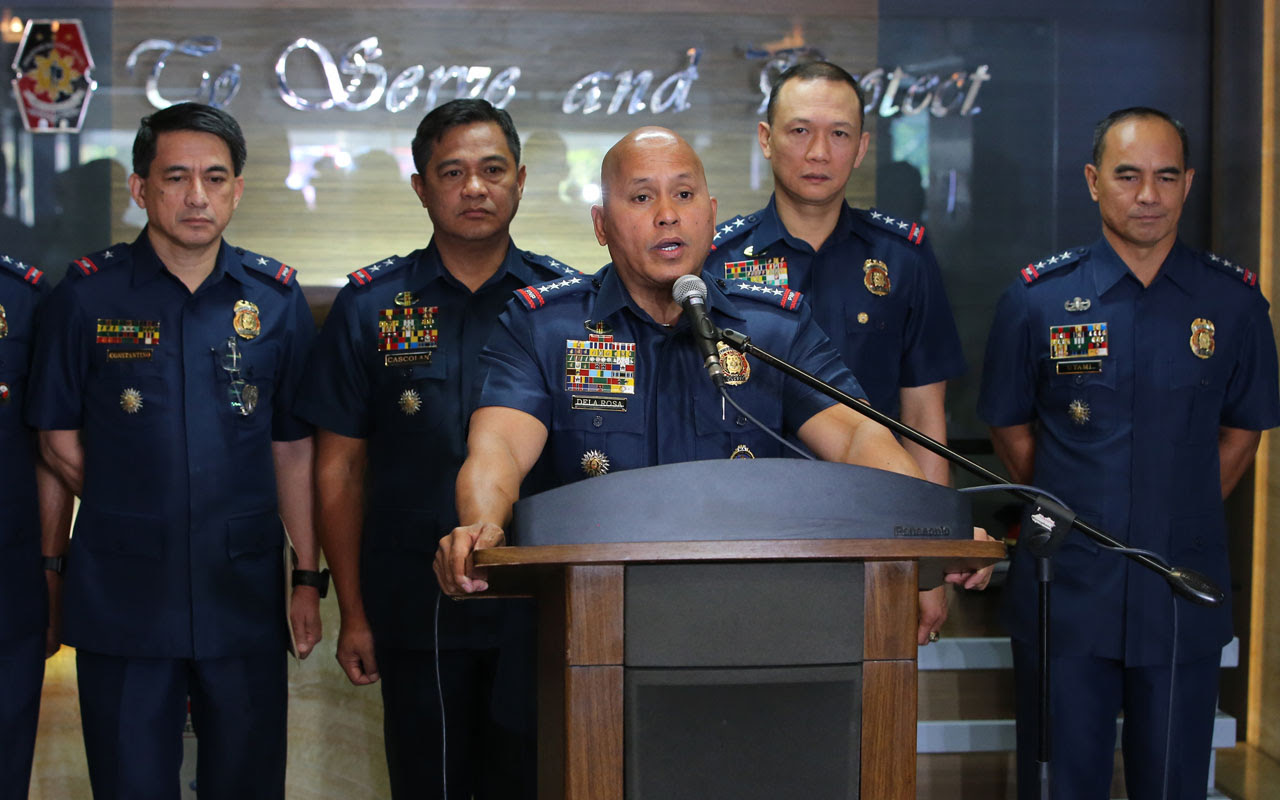 This handout photo taken on March 6, 2017 and released by the Philippine National Police-Public Information Office (PNP-PIO) shows national police chief Roland Dela Rosa (C) speaking during a press conference at the national police headquarters in Manila. The Philippine police chief said on March 6, his forces had "reloaded" and were back fighting their president's deadly war on drugs, just over a month after they were withdrawn because of widespread corruption. / AFP PHOTO / PNP-PIO / HO /

The Philippine police chief said Monday his forces had “reloaded” and were back fighting their president’s deadly war on drugs, just over a month after they were withdrawn because of widespread corruption.

President Rodrigo Duterte said in late January he had suspended all police from his crackdown on illegal drugs, which has claimed more than 6,500 lives, after describing them as “rotten to the core”.

National police chief Ronald Dela Rosa said Monday reforms had been implemented to ensure there was no repeat of previous problems, which included anti-drugs officers kidnapping and murdering a South Korean businessman.

“The war on drugs is on, and this time it is going to be more extensive, aggressive and well-coordinated, with built-in systems that guarantee full accountability and instill internal discipline among all personnel,” Dela Rosa said.

Philippine authorities had originally named the drug war “Double Barrel”, in a reference to a two-pronged strategy of police operations on the streets while also focusing on “high value” targets.

“Today we are going to relaunch the war on drugs, we’ve relaunched our project: Double Barrel Reloaded,” Dela Rosa said at a speech at national police headquarters in Manila.

Dela Rosa said in the statement there had been a “resurgence” in the drugs trade while police had been suspended.

“It only goes to show that we cannot afford to lower our guard when confronting a vicious enemy. There must be continuity of effort if the desire is to completely eradicate the problem,” he said.

Duterte said in late January he planned to “cleanse” the police force, which has long been regarded as one of the most corrupt institutions in the country, before letting it return to the drug war frontlines.

Dela Rosa’s comments on Monday and the accompanying press release referred to specific measures to stop corrupt police officers from being involved in the drug war, rather than structural measures to tackle graft throughout the force.

Duterte won presidential elections last year after promising to eradicate drugs in society by killing tens of thousands of people.

– Police under scrutiny –
Since then, police have reported killing more than 2,550 people and nearly 4,000 others have died in unexplained circumstances, according to official figures.

Many Filipinos continue to support the drug war.

Critics have warned of extrajudicial killings and other widespread human rights abuses in the crackdown, with Amnesty International saying last month police may be guilty of crimes against humanity.

Amnesty accused police of fatally shooting defenceless people, paying assassins to murder addicts and stealing from those they killed.

The announcement of the police rejoining the drug war came as the Senate heard testimony from a retired officer claiming he had been a leader of a so-called “Death Squad” for Duterte when the president was mayor of southern Davao city.

The officer, Arturo “Arthur” Lascanas, claimed he was personally involved in more than 200 killings starting in Davao, including the massacre of 11 Chinese drug suspects that he said Duterte ordered.

“There were times when those (doubts) came. We talked about it but because of our loyalty to Mayor Rody (Duterte), that was swept aside,” Lascanas said.

Lascanas said he had decided to speak out because of a “spiritual renewal” in 2015.

However Duterte and his aides have rejected Lascanas’s claims, which he first made at a press conference describing him as discredited last month.

Lascanas told a separate Senate inquiry last year he was not involved in any “Davao Death Squads”.

He said on Monday he had initially lied and said he was not involved because he feared for the lives of his family members.

Email ThisBlogThis!Share to TwitterShare to FacebookShare to Pinterest
Labels: 2017 at 03:17AM, March 06, Uncategorized