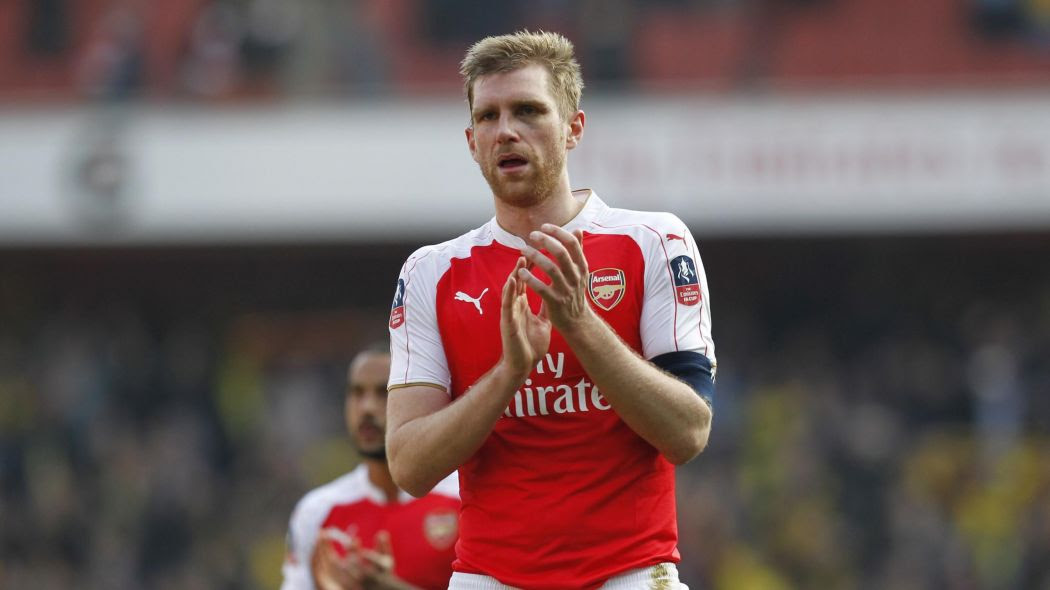 Arsenal captain Per Mertesacker admitted to tension in the dressing room on Monday and said his struggling team haven’t shown enough fight, on the eve of their Champions League mission impossible.

Arsene Wenger’s side crashed to a third defeat in their last four Premier League games on Saturday as Liverpool beat them 3-1 at Anfield and the Arsenal manager has had to dismiss reports of a training-ground bust-up involving star forward Alexis Sanchez.

Wenger dropped Sanchez against Liverpool, only introducing him at half-time when his team already trailed by two goals.

It was the worst possible preparation for Arsenal’s Champions League last-16 second leg against Bayern Munich on Tuesday, when they face the almost impossible task of overturning a 5-1 deficit.

And to make matters worse, German defender Mertesacker conceded Arsenal haven’t been willing to put their bodies on the line.

“I think we saw on a lot of occasions that we absolutely weren’t ready for a fight,” Mertesacker told reporters at the club’s training base.

“That is what I want to see tomorrow. That we are up for a fight, to challenge for something. We haven’t competed a lot in recent games and we need to turn that around.

“At Liverpool we had a chance to go for it, to push it, even without our best player on the pitch.”

Arsenal’s troubles have brought renewed criticism of Wenger from fans and pundits, with many claiming it is time for the Frenchman to step down after almost 21 years with the north Londoners.

Mertesacker, who has been with Arsenal since 2011, admitted the current dip has led to a fraught atmosphere, but he insisted the players still support Wenger.

“It’s hard for the manager to select the team but he does it with the best intention. We trust him,” Mertesacker said.

“It’s a little bit tense but it’s normal in a stretch like that. We want to change it and you can feel that in every training session.

“We need to make the first step to get the fans on board again.”

Mertesacker refused to be drawn on reports that Sanchez has become isolated from the rest of the squad after apparently criticising his team-mates following the Bayern first leg.

Amid suggestions Sanchez wants to leave, Mertesacker was asked how the Chilean was regarded by the players.

“I don’t understand the question. Every single day we try to train,” Mertesacker said.

“The manager has 25 options so it is difficult for him to decide who is in the squad. Everyone wants to push to be in that starting line-up.

“All these questions about one player are very distracting to our team. The club will not be about one single player.”

Email ThisBlogThis!Share to TwitterShare to FacebookShare to Pinterest
Labels: 2017 at 08:30AM, All intake, March 06, uzomedia